Not long ago, I saw art at a comic con that looked familiar. I passed by it once. Twice. Stopped again. Then it hit me: “Commander Mark!?” This was the man who helped me love art. Art led to comics. Comics led to writing. He ran a TV show that helped guide me – and I wasn’t alone. (UPDATED!)

Thousands of children grew up watching Mark Kistler on shows like Secret City on PBS. Some grew up to be professional artists, others engineers, a few became animators, and some became teachers (like myself). They are all “students” to Mark.

“I have a very, very liberal definition of ‘student,'” said Kistler, who’ll be at Wizard World Philly this weekend. “Probably a better term is ‘viewer,’ but I call you ‘student’ because you drew with me. I taught you!”

Thirty years ago, then 19-year-old Mark Kislter became “Commander Mark” on PBS to teach students across the nation, and after some Emmy-winning work, he’s now reaching students around the world through the internet.

And it all started with a dream.

From Student to Teacher

“I was fourteen years old and I was at a craft fair selling my little sketches and … when I was doing it, I was telling the kids [who visited my table] how to do it, and then I had kids drawing next to me.”

This sparked the idea of education, so Kistler asked area elementary principals if he could lead after school art programs. After a year, he was visiting schools in 11 cities in north San Diego County.

Mark gave himself the goal of reaching one million students by the time he turned 18. Though he estimates he’d reached hundreds of thousands of students over the next few years, he eventually pushed back his self-imposed deadline to 21.

“My mom has been a teacher and my personal hero,” he explained. “She infected me with her enthusiasm and her passion, and she said you always want to infect your students with your enthusiasm and your passion.”

Seeing instructional art videos at stores, Kistler noticed many were aimed at older students, or focused on more advanced techniques – none showed young children the basics of drawing in 3D. He began calling video companies and distributors, eventually connecting with producer John Price. After dozens of calls, Price begrudgingly agreed to consider having Mark join a new art program as consultant, so Mark set up a demonstration at a school near San Francisco where Price was staying – seeing Mark in action, and seeing the kids respond to his lessons so readily, Price signed off on Secret City.

Mark would reach his goal.

The Making of Secret City

“Secret City was actually a name inspired by one of my most profound teachers, Bruce McIntyre,” Mark said. “You stand on the shoulders of your teachers, from generation to generation … so the ‘secret city’ was nostalgic from my childhood.”

Through McIntyre’s The Drawing Textbook and afternoon classes at Jefferson Elementary in Carlsbad, California, McIntyre challenged kids to create their own “secret cities.” As a child himself, young Mark relished the challenge. At Mark’s insistence, McIntyre was brought on as a consultant for the show, reviewing Mark’s lessons and offering suggestions.

The then 20-year-old Mark couldn’t believe it when he walked onto set the first day.

“I loved it, I loved it. I was nervous and I wanted to do a good job, and have my characters created, and the real characters, and the set I created from a drawing.”

Helping him was actor Joel Gori, who – inspired by classic physical comedians like Soupy Sales – brought to life Zebtron, the creative and childlike robot, Cindy, the ever-frustrated but enthusiastic dragon, the mysterious Metaman, and all of the other characters that populated the show.

“When I first met him, he lived in California and he was sort of like this surfer boy, I mean he was really young,” said Joel, who was in his early 30s when he helped make Mark’s first TV series a reality. “That was my first memory [of him]. He was just this kind of energetic – his energy just filled the room. Just optimistic and positive about life.”

Gori said several of the characters were created by a consultant hired for the show, but who moved on before production began.  This meant Gori could shape the characters as he saw fit.

“I would work with [the characters] to make their spots flow easily,” he said. “Zebtron didn’t understand the language very well, so I tried to play with language: Houseboat, rowboat, rowhome.”

Cindy the Dragon, on the other hand, was emotionally younger, and easier to frustrate.

“She was very immature … like a little girl,” Gori explained, adding each character would fit an age group for the show’s audience. “Zebtron would’ve been the pre-teen or young teenager, and Metaman was, of course, a man of the world.”

For his part, Mark said he couldn’t have done it without Joel by his side.

“He would be dressed in full make-up, in pink-striped Zebrtron costume, with green Cindy the Dragon arms,” Mark recalled, who hasn’t seen Joel in two decades. “I would be talking with him, hearing him do that ‘ya dadabo be ragga‘ Cindy the Dragon talk, but I would be looking at Zebtron …. Sometimes it was all I could do to stop from cracking up!”

Not everything went as smoothly. Creative directors and museum consultants were brought on to increase the art history component of the show, but most of their suggestions rubbed Mark the wrong way.

“It was chitter chatter, I thought, because I never did what they told me to do, because I thought it was lame,” Kistler said. “They told me I should teach the kids to respect it and not to touch it, and here I was telling the kids to smear [their own] art.”

More experienced in showbiz, Joel was concerned about the show.

“The scariest part of that was that I had to do all these art projects, and it was live,” Gori explained. “They did not want to have to edit. … Mark had a big responsibility because he had to carry the show and figure out how to make these things work.”

Taping two shows a day over the course of six weeks they made 65 shows – a single season that would air in reruns for a decade and teach a generation of artists.

Commander Mark on the Internet

Kistler made a series of shows, including Draw Squad, and The Imagination Station, but despite similar cult followings, none remained on the air for very long.

“It’s always been a funding issue,” Mark explained. Looking for a way to reach more students, Kistler took his lessons to the internet, setting up blogs, a YouTube channel, and online classes.

“Just a few months [earlier] I started looking around at YouTube how-to-draw stuff and there’s some delightful stuff out there,” he said. “I saw these other guys with millions and millions of views, but they weren’t teaching things that I thought people could carry for the rest of their lives.”

Through MarkKistlerLive.com, he reaches thousands of students (mostly homeschooled) from around the world, posting lessons and curriculum.

“It was cool seeing students from Spain and China and Russia,” he said. “They stay up late on Mondays and I’m part of their art curriculum.” From there, dozens of students draw along with him live.

Art on the Convention Circuit

Other artists suggested Mark try his hand at comic conventions, and eventually he gave in, getting a booth at Comicpalooza. He set up the table modestly at first: a few photos, his drawings, and his name. It wasn’t long, however, before other artists recognized him, and visited from their own booths.

“That was an amazing weekend experience,” Mark said. “The first couple hours, these other artists found out I was there so they started leaving their tables and coming up. … Some of them, in their childhood, sat and watched my show. Some were in juvenile detention and watched my show and art saved their lives. … I didn’t have a clue. I just went in there with all my current art and my current books. I had no idea the fan base was so deep and wide.”

Kistler began to tear up, thinking of the thanks he received from other artists, but the admiration was mutual.

“I must have had a hundred, 38, 39 and 40-year-old men come up to me and start crying,” Kistler said. “It was so cool. It was really uncomfortable though because they were so emotional and they were hugging me and I am a hugger.”

As he grew more experienced with conventions, he made references to his former shows more prominent, spoke at art panels. He also seeks out other exciting artists to trade prints with.

Now he’s attended or been invited to conventions all over the world, from California to Dubai – and Mark’s loving every minute of it!

Possible Reunion Between the Commander and Zebtron

Mark will be at Wizard World Philly this weekend, not too far from Joel’s hometown. The two – who reconnected via Facebook during the production of this article (you’re welcome guys!) – are hoping to meet while Mark is attending the convention.

“I’m surprised that it’s taken this long to start going to these kinds of conventions,” Gori mused, adding an eagerness to see his old friend again.

Every now and then, as in this case, someone tracks down Gori and asks him about Secret City and Commander Mark, and the memories are always fond.

Mark Kistler can be found online through his main website or on Facebook, and will be at table B44 at Wizard World Philly June 2-5. 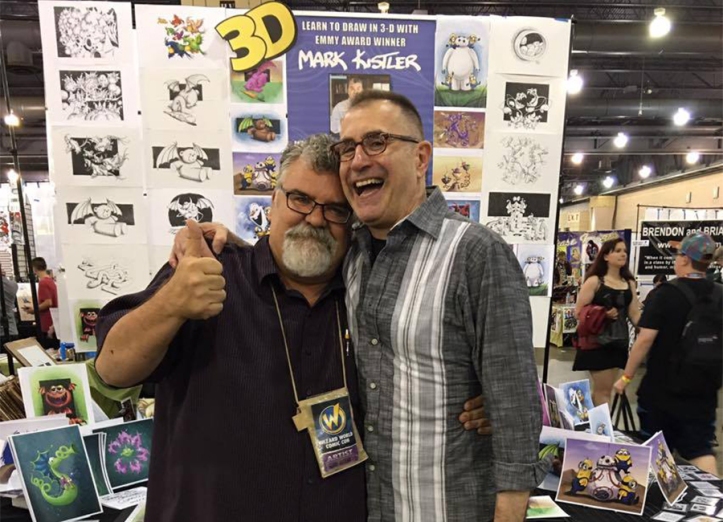