Not every legend at Monomythic.com need be millennia old, here’s one that’s been around for less than a decade.

Yes, LOLcat, the bane of internet intellectuals and boon of every tween to discover e-mail forwarding, but what does this oft-derided web meme have to do with the origins of myth?

Simple: it is mythmaking in action.

Although not a real culture per se, the LOLcat phenomena grows in much the same way a real society does. It has converts and natives (those who helped initiate the legend), it has a language, distinct iconography, traditional mores and, most importantly, religion.

In the non-existent world of LOLcat, all good things are gifts of Ceiling Cat, who watches on the deeds of those below, and all sinful temptation comes from Basement Cat, whose reflective eyes call out for souls in the dark.

Of course, unlike the partially fan-made religion of the Jedi and the officially licensed faiths of roleplaying games, the religion of LOLcat formed organically. Amateur (and professional) Photoshop artists built off the work of others, referencing what was popular and dropping more forgettable contributions. It is oral tradition in the digital age.

This is a very condensed version of what led to the formation of modern day Christianity (though obviously with much less seriousness). In the early years many groups branched off from the initial faith, but as Gnosticism and Arianism fell by the wayside, an orthodox belief system was established.

And so too has it been with Ceiling Cat, initially a joke meant to scandalize personal indiscretions. The heavenly cat developed an adversary, an only son and even alternative religions and non-believers. 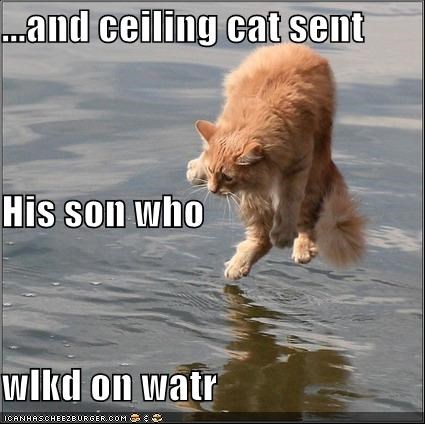 It seems Ceiling Cat has spoken, and the fake mythology will never be the same again.