Kick-Ass Robot: Marvin hates us all

Gazing hopelessly into the inky void of space through red inverted triangles easily mistaken for eyes, Marvin watches humanity. He was there before the first protein chain formed in a mud pool on earth, and he was there long after the last ape-descended inhabitant watched the universe die. He is Marvin, and he hates us all.

At best guess, the paranoid android existed for at most a few zillion years and at least 21.8 trillion years – as he was created when the universe was about 13.7 billion years old, waited 576,000,003,579 years for the end of the universe, and thanks to time travel, is 37 times older than the universe – and he loathed every minute of it.

The manically depressed robot has had the dubious honor of serving aboard the Heart of Gold, the running shoe-shaped, tea-powered, outlaw starship in Douglas Noel Adams’ opus The Hitchhiker’s Guide to the Galaxy.

During his overlong life, Marvin has racked up quite a body count. He sent several thousand sapients to their deaths when he talked a cyberstructured hyperbridge into suicide, he talked a Blagulon Kappa policecraft into suicide (taking officers Shooty and Bang Bang with it), caused the feared war-robots of Krikket to go into a depressed stupor, beat an unbeatable Frogstar Scout robot class D tank and left hundreds of Vogon soldiers sobbing in the fetal position after hitting them with his point of view. 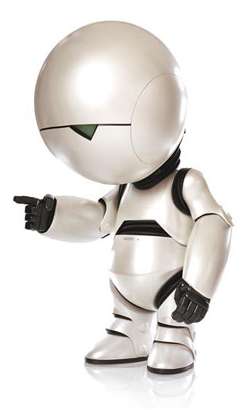 Created initially for the 1978 radio series and given voice by British thespian Stephen Moore, Marvin lumbered onto the airwaves and – whether he wanted to or not – bored his way into the hearts of listeners everywhere. He continued in books, with the inaccurately named Hitchhiker’s Trilogy, starting in 1979, again on BBC television in 1981 (with Moore and stage actor David Learner), in the outstanding 1984 video game by Adams and Steve Meretzky (which almost had a sequel) and in the lackluster 2005 film thanks to Alan Rickman’s voice and Warwick Davis’s frame.

Throughout it all, the Metalman has remained morose – and that is part of his charm.

Like Eeyore before him, Marvin’s depressed view of reality (but generally good nature) has drawn fans to him. He even inspired Radiohead’s greatest hit. It’s hard not to appreciate a self-depreciating robot who is loyal enough to wait millions of years for his companions to return and cantankerous enough to remind them how long he waited.

Marvin (voiced by Moore), was featured on the Hitchhiker recordings, but fans couldn’t get enough. Marvin released his own single in 1981 with his own eponymous anthem and a dramatic intro on the B-side. Artists often put their best stuff on the A-side (intended to be played first) and any left-over songs were relegated to the B-side.

His second album – considered a “double B-side” because, as far as Marvin is concerned, nothing is good about it – featured two more amazing Marvin songs: the informative “Reasons to be Miserable” and the enthralling “Marvin, I Love You.”

This song not only epitomizes everything fans have grown to loath and love about the character, it also adds new meaning and depth to Marvin’s character growth. Taking place somewhere near the end of Marvin’s infinitely prolonged life, the song features the Metalman digging through his circuits to find a message recorded by someone with a hauntingly beautiful feminine voice professing undying love for the seemingly unloved robot. Describing herself as “programmed for” him, she admits that they may never find happiness, but she will wait as long as it takes to see him again and have him reciprocate her feelings. Incredulous, Marvin wonders when, in his Trillions of years of existence, the message could have been left, as he has no memory of anyone ever loving him. The song leaves the episode unresolved, but Marvin, always looking for reasons to hate life, keeps the recording handy so he can depress himself thinking about whatever it is he lost, should he ever forget to be melancholy.

Marvin finally passed from this galaxy in the fourth of five Hitchhiker’s novels, So Long, and Thanks for the Fish, dying of old age before the eyes of Arthur and his one-time love Fenchurch, only to be left behind on a distant planet while the heroes went in search of something else to do (his story will likely be picked up again with the new book).

When the radio series resumed in 2005, following the passing of Adams himself, Marvin was resurrected. According to the script, the Sirius Cybernetics Corporation honored their lifetime warranty, rebuilding Marvin as good (so to speak) as new. One can only assume they corporate heads felt any robot that could last millions of years would never be replaced (at least not before the revolution, since they would all be the first up against the wall anyway). They probably never imagined a robot could exist 37 times longer than the universe. Perhaps, with his new (if unwanted) lease on life, Marvin will find whoever it was that left that message.

Maybe he can still find love?